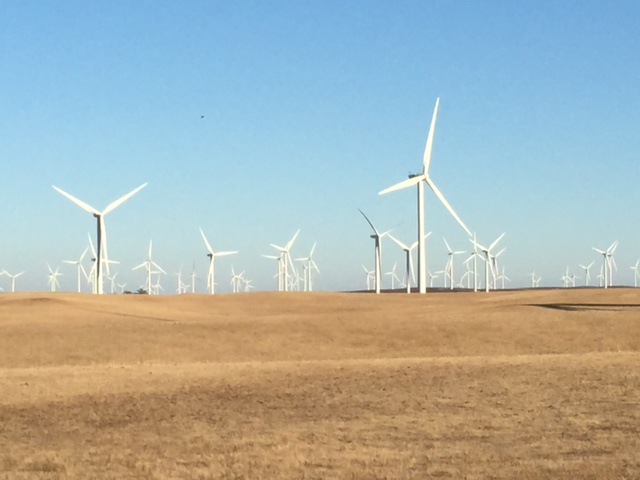 Our son, Ben, took 55 of his closest friends to NYC for the Climate March last month and when he was home over Fall break, he spent quite a bit of time updating his mom and dad on the current status of Spaceship Earth.  It was very cool for us to listen to Ben’s passion as he shared the latest new from what scientists are saying about the climate.  So when we drove East through the vast open areas of California, headed for the Yosemite National Park, we ran across a huge garden of wind turbines that stretched for miles across the treeless landscape of this sparsely populated part of the state.  We decided to research a few facts for ourselves on this renewable source of energy and here is what we learned:

•  Wind power is currently the fastest-growing source of electricity production in the world.

•  Iowa and South Dakota generated more than 25% of their energy from wind during 2013.

•  In 2013, the roughly 168 million megawatt-hours generated by wind energy avoided 95.6 million metric tons of carbon dioxide (CO2) — the equivalent of reducing power-sector CO2 emissions by 4.4% or removing 16.9 million cars from the roads.

•  Modern wind turbines produce 15 times more electricity than the typical turbine did in 1990.

• At times, wind power produces as much as 45% of the electricity in Spain.

•  Wind is a credible source of new electricity generation in the United States. Wind power comprised 43% of all new U.S. electric capacity additions in 2012 and represented $25 billion in new investment. Wind power currently contributes more than 12% of total electricity generation in nine states (with three of these states above 20%), and provides more than 4% of total U.S. electricity supply. Source: 2012 Wind Technologies Market Report

Source:  unless otherwise noted, these come from the Wind Energy Foundation, Washington, DC.