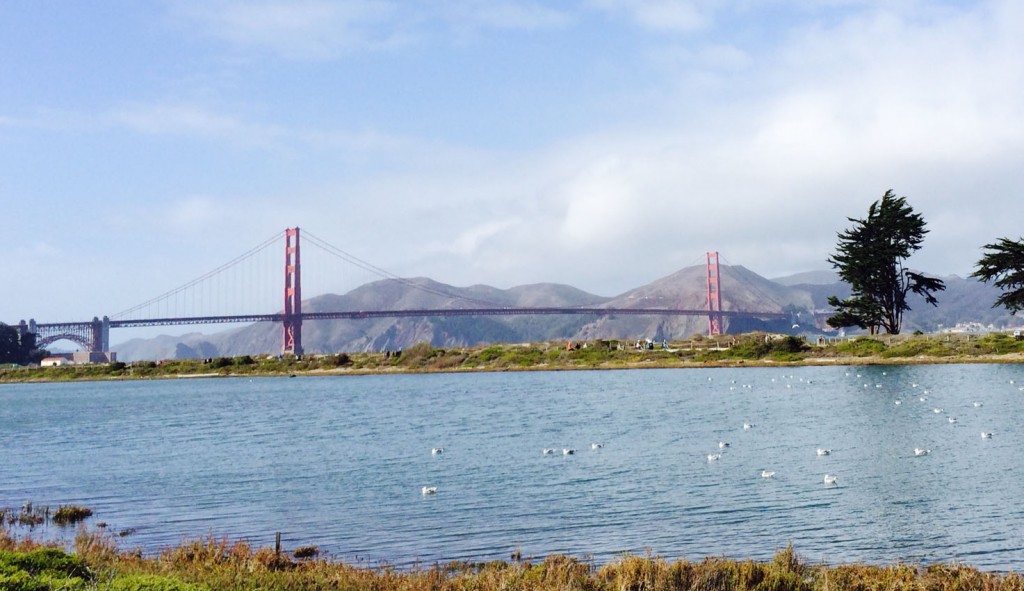 On Saturday, we grabbed the grocery bags and headed to the Farmer’s Market.  A broad selection of fresh vegetables and fruits adorned a large market.  Maggie makes this trek every couple of weeks and folks from all ethnic groups, some of whom work the land that produces what is being sold in the market and some who are hired to trade the produce.  We ate papoosas and drank mango drink before Maggie dropped us at the BART.  We took it downtown to rent bicycles for a ride along the bay and over the Golden Gate bridge.  Most of the ride along the Bay was flat but approaching the bridge, we gained altitude as we climbed up to the west side (where bikes cross).  The wind whipped our faces as we rode upward toward the bridge.  We stopped almost midway to look at the views out toward the Pacific and back toward the city.  We coasted on the downward slope toward the far side for a short rest before the ride home.  We stopped in for water and rode through the Presidio, a former fortress originally built by Spain (ironically named the Royal Fortress of Saint Francis) in 1776 and later passed to Mexico and finally the United States.  The base has been decommissioned and it now sits upon the highest point of the Golden Gate National Recreation Area.