Back when I started this series of scenes shot at Union Seminary, I mentioned that Sally and I met in a lunch line at the seminary during my last week of classes before I graduated. I promised to show a scene from a movie that included the spot where we met. Alas, I thought the scene was from the movie, The Mirror Has Two Faces, but I was wrong. There are UTS scenes in that movie but the scene with the stairwell was not. I haven’t been able to recall the movie that included it. We had been married about two years when we were sitting in a movie theatre watching a movie and the scene popped on the screen. We almost choked on our popcorn while loudly exclaiming to those around us, “That’s where we met!”

But along comes this scene from TV’s third season of The Good Wife, when Julianna Margulies and Michael J. Fox, in their respective roles of Alicia Florrick and Louis Canning, are both at a supposed liberal arts college providing guidance to their new hires. When Canning shows up he is climbing the stairs in the stairwell just outside the Refectory. The brief conversation they have is about the spot where Sally and I were first introduced by someone who thought we had a lot in common. We were both from Florida, both studying to be ministers, and both had an interest in Latin America. I had served in the Dominican Republic and El Paso, Texas as a United Methodist Mission Intern and Sally was, within the week of our meeting, headed off to serve for a year as a Presbyterian missionary in Nicaragua.

This past Spring, Sally and I took a short vacation to New York City and stopped by Union and 475 Riverside Drive, the former headquarters for our respective mission agencies. While we were at Union, we revisited the spot where we first met, just for old times sake! 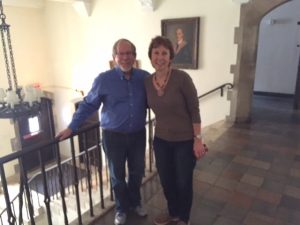